Home › News› The Armenian Nation together with the AGBU and the Armenian Church grieve the loss of one of their most faithful sons, Mr. Karnig Yacoubian

The Armenian Nation together with the AGBU and the Armenian Church grieve the loss of one of their most faithful sons, Mr. Karnig Yacoubian

It is with deep sorrow that we inform our communities of the recent passing of Mr. Karnig Yacoubian, former AGBU Central Board & Council of Trustees member. An immense loss for the Armenian Nation. He leaves behind an impressive legacy of benevolence and dedication for the betterment of Armenians across major communities in the Diaspora and Armenia.

A graduate of the American University of Beirut and a civil engineer by profession, the Syrian-born Yacoubian could be described as a builder, a benefactor and, above all, a highly motivated and dedicated individual. All who crossed paths with him were charmed by his wit and charisma, as well as inspired by his commitment to family.

The scion of a prominent Armenian family with an impressive legacy of dedication and support for the AGBU mission, Yacoubian, along with his wife Anahid, his brother Levon and their respective families, have always held the mission of the organization close to their hearts.

An active AGBU member from an early age, Yacoubian served in many capacities–from Chapter Chair in Damascus to Central Board Member from 1994-2006. From 2006-2017, he was a member of the Council of Trustees and served as one of four AGBU Emeritus Trustees until his passing.

AGBU President Berge Setrakian remarked that Yacoubian belonged to a special circle of inspired leaders who reached the heights of success in their professional lives and attained influence and respect among captains of industry and heads of state. He was decorated with countless high honors, medals, and awards by religious and national leaders for service to country and community, including the Order of the Star of Jordan. Yet his strongest attachment was to his Armenian identity and the Armenian Church, for which he received the St. Gregory the Illuminator Order, the Mkhitar Heratsi Medal, and the Prince Cilicia Medal.

His volunteerism was matched by his philanthropic legacy, which has been made visibly present with the numerous community projects he and Anahid supported financially – from the AGBU community center in Qamishli, Syria to the renovated offices of the AGBU Center in Montreal, and the headquarters of the Armenian Diocese in Canada. They also funded the installation of a teaching center in the Republican Scientific Medical Library in Armenia and the construction and renovation of the Vaskenian Theological Seminary at Lake Sevan. In Lebanon, their dedication to the Armenian Church inspired them to fund the development of the residential complex of the Holy See of Cilicia in Bikfaya, Lebanon and construction of its seminary in Antelias. Most recently, they financed the building of a new candle-lighting chapel and pontifical Mausoleum at Holy Etchmiadzin to be completed in 2022. The Yacoubians have also been distinguished for their steadfast support of higher education with their generous commitments to the University of Armenia (AUA).

In lieu of flowers, donations can be made to AGBU Armenia: https://bit.ly/KarnigYacoubianDonation 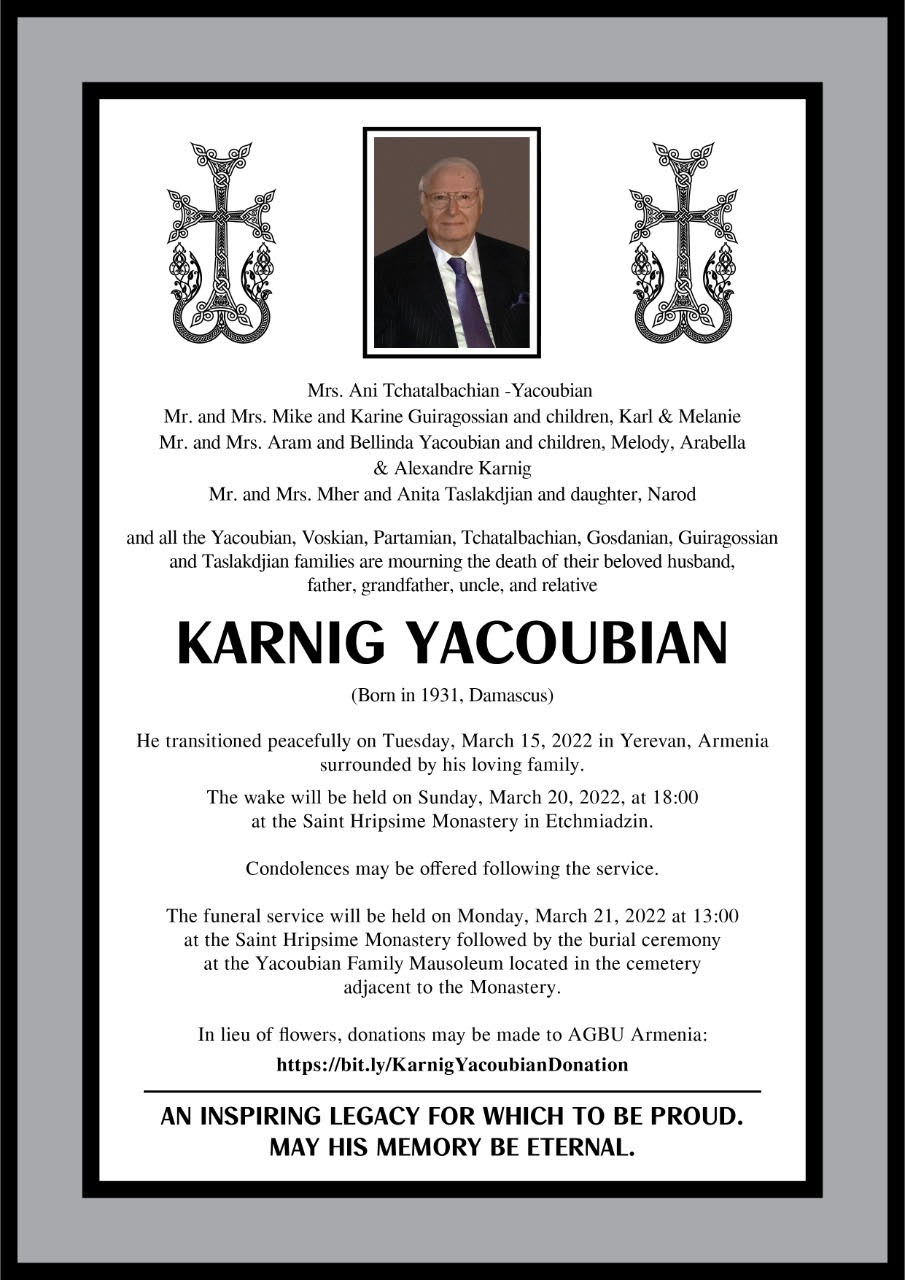 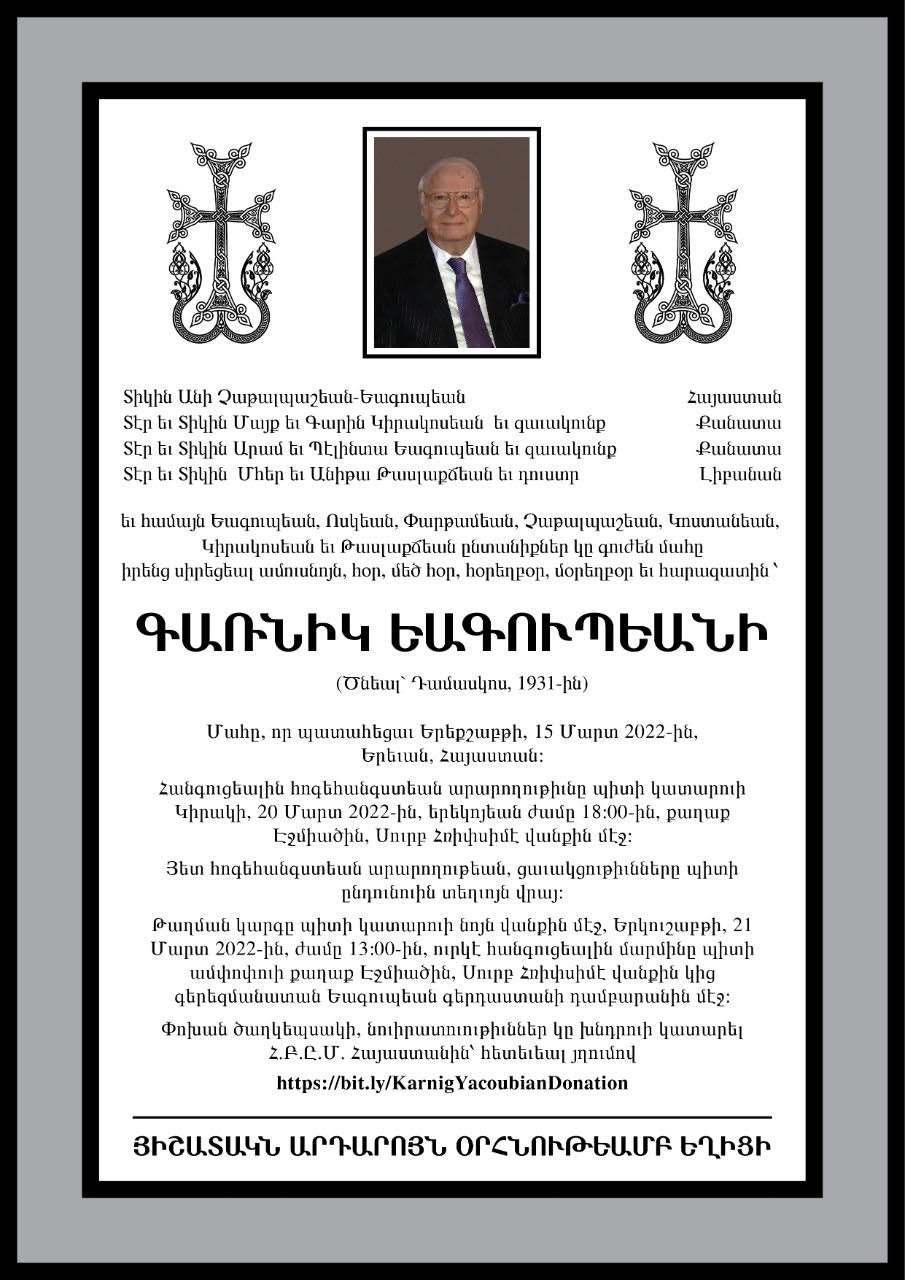